The family business, flies international visitors from over 59 countries,
with Queensland well known for its reliable climate, where their fleet of
balloons fly all year round.

Andrew Steel, Managing Director, said with so many customers from China,
America, India, Singapore and Europe his team are always inspired to
innovate. He said the company had a strong track record for innovation
including their design for the world’s first commercial shaped balloon, a
koala launched in 1997 and in 2001, one of the first remote controlled
ballooning in-flight camera services.

This new ballooning offering is a Google Cardboard VR Viewer designed to
cradle any balloon passenger’s smartphone, shows a video that captures the
balloon experience, floating over the Australian outback, using 360 degree
video technology, that visitors can watch anytime, again and again.

An app installed on a compatible smartphone, splits the video into two
images - one for each eye. Lenses in the VR Viewer create the impression of
a stereoscopic 3D image with a wide field of view, ideal for ballooning. The
app then utilises smartphone technology to determine the exact position the
device is being held so that any movement of the VR Viewer provides the
sensation of being in the middle of the hot air balloon and turning one’s
head to see the Australian landscape.

Even better, international visitors will be able to return home from their
Australian holiday and show friends and family on their VR Viewer the same
360 degree view they enjoyed from their balloon of wide open blue skies and
the fleet of Aussie designed hot air balloons flying over mobs of kangaroos
in some spectacular scenery.

The free Hot Air Balloon Cairns Virtual Reality Viewer is being launched on
Booth 500A at the Melbourne Convention Centre. 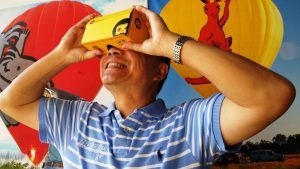