The Gold Coast will star yet again in a Bollywood movie, launched this week, featuring two characters Sid and Trisha, flying here in a hot air balloon with us.

The marriage proposal in the Gold Coast balloon, has also been featured on the movie poster, in the Times of India and on the front page of the Bombay Times and Delhi Times.

Local family business, Hot Air Balloon Gold Coast, have been sworn to secrecy for months, while post production on the movie was completed for its February 28th opening. A cast of 40 from India met the balloon pilots and crew at sunrise, to film the marriage proposal, last October.

A tradition in the Bollywood movie business is to also release a soundtrack, weeks prior to the film, with the star couple featured in the hot air balloon on posters and youtube clips all over India.

Managing Director, Andrew Steel, said he had been travelling to India annually for the past 7 years to promote the Gold Coast.

Mr Steel said the company had flown thousands of visitors from India, including many honeymoon couples and Indian family groups.

“Our team worked with the Director and as hot air balloons can’t be steered, it make it a challenging and very different operational day, for our fleet of balloons.

“The movie means exposure for the Gold Coast, Queensland and Australia with the Indian travel industry, which is significant and we are looking forward to it bringing years of positive publicity and new visitors.” 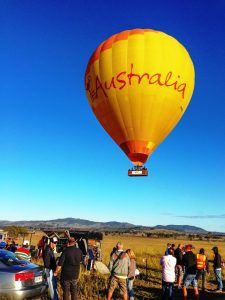